Live at the Deer Head Inn 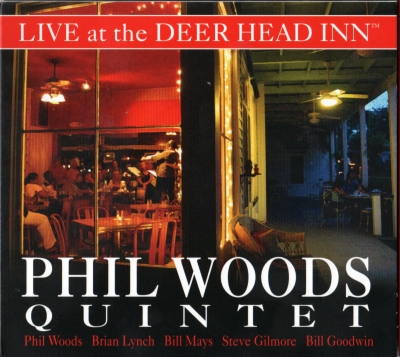 PHIL WOODS: “It was a logical delight for the Phil Woods Quintet, an old established firm (since 1974), to record for the new Deer Head Records label. It is a new label, but also an established firm, the oldest continuously operating jazz club in the country.

I am reminded of a comment by my old boss, Dizzy Gillespie. When asked “How you doing, Birks?” he responded, “Well I’m not getting worse!” And I can honestly say both old established firms are not any the worse for wear! We hope fans of both will agree.”

BRIAN LYNCH: “It was a special evening indeed to record with the Quintet live at the historic Deer Head Inn, a site that has immense resonance in the history of the group. After 23 years in the band, it’s still a thrill, a honor, and a joyously accepted challenge to be on the bandstand with these great musicians. I think you’ll hear on this recording the love and respect we all have for each other manifested in sound, in real time. Grandmaster Phil Woods, cats: bravo!”

BILL MAYS: “I’M THRILLED TO HAVE BEEN A MEMBER OF THE QUINTET OVER THE PAST SEVERAL YEARS AND ESPECIALLY HAPPY THAT I’VE HAD AN OPPORTUNITY TO WRITE FOR THE BAND, AND BE PART OF THIS LIVE RECORDING.”

STEVE GILMORE: “It’s been an honor for me to “hit it” with these guys , and all the other gentlemen that have passed through the Phil Woods bands for some 40 years. I’d like to think that in that time we’ve developed a recognizable group sound. And to record for a live audience at the Deer Head Inn , which has been an integral part of my life since the late 50’s , makes it even more special. My hat’s off to the management of the Deer Head for continuing their dedication to live jazz that hopefully will continue ad in-fini-tum.”

BILL GOODWIN: “THE ORIGINS OF THIS BAND REVOLVE AROUND THE DEER HEAD INN.  STEVE AND I PLAYED HERE TOGETHER IN THE EARLY 70’S WITH JOHNNY COATES AND AFTER PHIL ARRIVED IN THE AREA IN LATE ‘73 WE JAMMED HERE ALSO.THE GROUP FORMED IN EARLY ’74 WITH PIANIST MIKE MELLILO WHO WE MET (GUESS WHERE ) AT THE DEER HEAD.

THIS NEW RECORDING IS THE FIRST WITH BILL MAYS OUR LATEST PIANIST. I DON’T RECALL HOW MANY WE HAVE DONE WITH BRIAN SINCE HE HAS BEEN IN THE BAND FOR 23+ YEARS, JOINING IN 92.  NOW WE HAVE COME FILL CIRCLE WITH THIS RECORDING OF THE LONGEST RUNNING JAZZ GROUP AT THE LONGEST CONTINUOUSLY OPERATING JAZZ CLUB IN THE COUNTRY.”