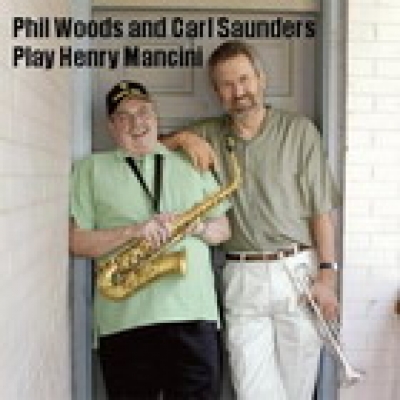 This session recorded in 2003 features the music of Henry Mancini played by a Quintet led by Phil Woods on alto saxophone and Carl Saunders on trumpet and flugelhorn. Featuring over 75 minutes of music the CD reprises some of Henry Mancini’s greatest jazz compositions including The Pink Panther, Mr. Lucky and tunes from the Peter Gunn TV series soundtrack recordings

"Even more than nine years after his death, Henry Mancini is the most famous of all film composers. His film writing was jazz-oriented without being jazz, and his arrangements were both subservient to a movie's story (as all scores must be) and strong enough to stand on their own apart from the picture." "One of the all-time great alto-saxaphonists and a major force in the jazz scene since at least 1954, Phil Woods is not only one of the masters of bebop but a musician who through the years has extended the idiom through his personal voice, inventive repertoire and inspired settings." "Carl Saunders is not as world famous yet due to his valuable but underrated work as a lead trumpeter in big bands and being based in Los Angeles. But his playing on his three solo albums and the Jazzed Media CD "Phil Urso and Carl Saunders Salute Chet Baker" show just how tremendous a trumpeter he is, ranking near the top of his field." "Listeners will have no difficulty having fun listening to the infectious performances on one of the finest jazz tributes to the music of Henry Mancini."